This week has been a very busy week for Green Class. We visited the Science Museum for the very first time. We took the trains into South Kensington and got to watch an interactive story of ‘The Three Little Pigs.’ Our children enjoyed the show and learnt about the different materials used to build the three houses. We also found ourselves face to face with an astronaut and saw the real Apollo 13.

This week in Green Class we have been taking maths outside. We used cotton buds and paint to make repeating patterns. We made up our own shapes and in particular we liked using hearts and 2d shapes.

This week we have been learning about subtraction. We have been using chocolate coins in line with our theme of pirates. The children have been solving subtraction problems and then writing the matching number sentence. We also ate the coins once we had finished the maths, talk about yummy maths!

This week we have been learning how to write our very own number sentences. We used the compare bears to make our own number problem and then wrote out the number sentence after we had added two amounts together.

This term in Green Class we read the story “ We’re Going on a Bear Hunt.” The children enjoyed the story and had great fun acting out the story. We learnt about positional language and placed the bear in different positions using the cave we made.

In Green Class we have been solving number problems using chocolates. We have been subtracting different amounts of chocolates and finding how many we have left. Some of the children have written the matching number sentence too.

This week in Green Class we have been learning about pattern. We have been using different shapes to make our own repeated patterns. Some of us used two shapes and some of us used three. We were able to say what would come next in the pattern and we made our very own patterned underpants.

This week we have been learning about weight. We used scales to measure different ingredients for pancakes. The children began to use the mathematical language heavy and light. We also held the ingredients in our hands to identify the heavy and light objects.

In Reception, maths centres around number, shape, space, measure and problem solving. Children will learn to count reliably up to 20, placing numbers in order and saying what is one more or one less than a given number. Using quantities and objects, they will be able to add and subtract two small numbers. Children will solve problems such as doubling, halving and sharing and use everyday language about size, weight, capacity, position, distance, time and money. They will recognise, create and describe patterns, exploring characteristics of everyday objects and shapes and using mathematical language to describe them.

Jack and the Beanstalk

In Green Class we have been reading the story Jack and the Beanstalk. We have been learning about height and we have been ordering our class by height. We then moved onto ordering the beanstalks by height. We even ordered the adults in the classroom too. Mrs Delpeche was the shortest and Mrs Gunes was the tallest. The children used the language of tall and short comparing the two beanstalks. Some children even went onto order 5 beanstalks. They were beginning to use the language tallest, taller, and tall and short, shorter and shortest. 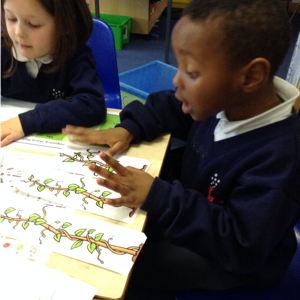 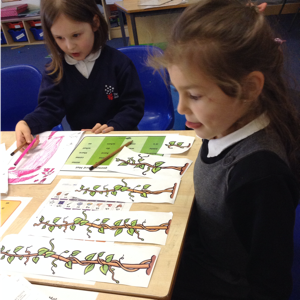 This week we have read the story Cinderella. We have been measuring our feet using Uni fix cubes. We were comparing different shoe sizes and identifying which shoe is the longest and which is the shortest.

In Green Class we have been learning about 2D and 3D shapes. We sorted them into 2 hoops one for 2D and one for 3D. The children worked together to sort them into both hoops. We said that 3D shapes are fat shapes and 2D shapes are flat shapes. We spoke about the properties of the 2D shapes together.